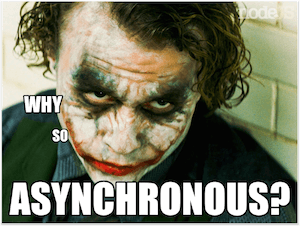 JavaScript is single threaded, causing code to execute from top to bottom, so two bits of code cannot run at the same time. For example, you might download a JSON file from an (external) server and you’d have to wait until you retrieve that file. Instead of blocking the thread, there are ways you can streamline this code execution by using asynchronous JavaScript.

You’re probably already familiar with asynchronous JavaScript (and js frameworks in general). Events (observer pattern) and Callbacks are examples of asynchronous code. For example, whenever you make an Ext.Ajax request or a user presses a button, the action is pushed into a queue, which is called the event loop. The JavaScript engine doesn’t start processing the event loop until the code has been executed after an async function (from top to bottom). This means that JavaScript code is not multi-threaded even though it appears to be so. 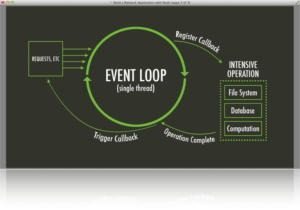 Callbacks are often used when you have an async operation (for example, loading data from a database) that should notify the caller about its completion. When calling such a function, you can pass it another function as an argument, which confirms that something has happened. Putting callbacks into callbacks is a great solution, and I think that’s one of the powerful features of JavaScript. However, it can be messy when your code requires other asynchronous pieces of code first.

For example, you read your user settings from local storage (that’s a callback!). Based on those settings, you make a request from some external server with a database connection, (that’s callback #2). Before you render that information on the screen, you retrieve something else from the database (that’s callback #3).

This is where JavaScript Promises comes into play. It’s a new way of writing your code in a more readable and understandable way. A Promise represents the result of a task, which may or may not have been completed. Like a contract for a value that we might not know when the promise is created. It’s an object or function with a then method. Because of the “then” method, the action can be chained endlessly, and that’s awesome!

A Promise typically has one of these 4 states.

Promises is part of ECMAScript 6, which is available in the client of some modern browsers, and also within the latest version of Node.js. The following browsers do not support JavaScript Promises: Explorer 11 and below, Android 4.4 and below, and iOS Safari 7.1 and below.

Here’s an example of a function that returns a Sencha Promise object:

The Ext.Promise constructor takes one argument, a callback with two parameters, resolve and reject. When it does something asynchronous within the callback, like retrieving user settings from a local storage store, then it calls “resolve”; if everything worked it passes in the result, otherwise it calls “reject” and passes in what went wrong.

Here’s how you use that Promise:

The “then” takes two arguments, a callback for a success case, and another one for the failure case. Both are optional, so you can add a callback for the success or failure case only. You can chain as many then methods as you want to run additional async actions one after another.

Besides the “then()” instance method, there are also ways to terminate a Promise chain (“done()”), cancel pending chains (“cancel()”). Also, there’s a way to attach an onCompleted callback to the chain (“always()”), for example with cleanup logic regardless the outcome. And, you can attach an onRejected callback, if one action within the chain is rejected (“otherwise()”), for example to handle failures.

In addition to Ext.Promise, Sencha will also ship Ext.Deferred, which is a mechanism used to create new Promises within Ext JS 6. The difference between these two constructors is that with a deferred constructor the creator has direct access to “behind the scenes” extras, such as progress updates.

Last but not least, Sencha integrated Promises support into Ext.Ajax.

Ext.Ajax.request() is now an instance of a class derived from Ext.data.request.Base which can be used with a then method. It allows you to write code like this:

There’s a lot more information to explain how you can use JavaScript & Ext JS Promises. Take a look at these resources to learn more!