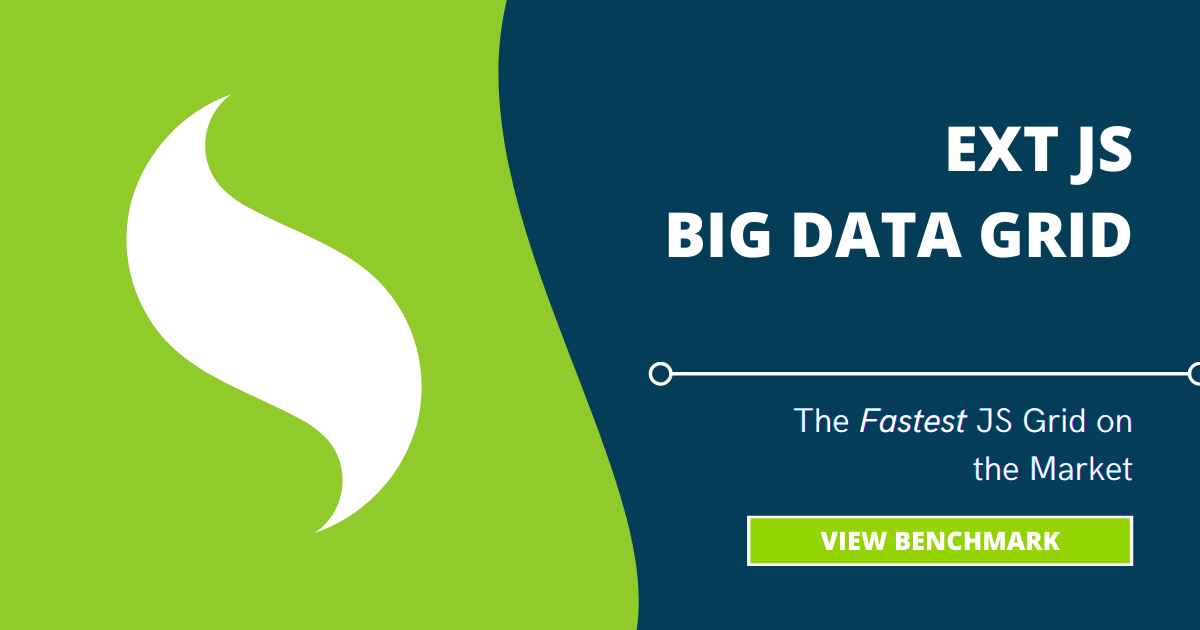 The overall volume of generated data has grown exponentially over the past couple of decades. As a result, modern JavaScript data grid components that manage the display and analysis of these massive data volumes have evolved. Today, there are many data grid offerings in the market that tout enhanced capabilities to display and manage analysis. But how many of them can withstand the true test of performance as it relates to “Big Data”?

To answer this question, we got into the trenches and ran performance tests comparing Ext JS data grid to other popular market offerings and outlined our results in this post.

There have been several JS Grid performance claims (each valid in their own way), but many lack the demonstration of real use case scenarios — specifically pertaining to large datasets. This performance evaluation was based on how an end-user would actually use the grid in the field and we put the most popular data grids to test.

Our test results indicate that while most grids do well with initial static load time and dynamic filtering speeds, Ext JS data grid outperformed most competitors on scrolling performance when tested with medium to large datasets (100,000 to 1,000,000+ data volumes). Ext JS was over 300x faster than leading data grid vendors.

Let’s dive deeper into the experiment details and how the measurements were conducted.

The data grid performance was measured on 3 main metrics.

Experiments were conducted on server-side data containing small (10,000), medium (100,000) and large (1 million+) datasets (number of rows). For each competitor, their respective Grid Infinite/Virtual Scrolling capabilities were used to gather the metrics.

Before we jump into the results, it’s important to quickly distinguish between the different types of server-side scrolling. Vendors use scrolling terms interchangeably, so we’d like to take a minute to go over what each feature really means and which one was used for this analysis.

Paging: Users can scroll through a page at a time or through a range of specified pages to retrieve information. Grid retrieves the requested pages of data and displays them.

Infinite Scrolling: Users can navigate through pages without specifying which ones. Data pages are loaded when the scroll bar reaches the end of display. The scroll bar size does not visually reflect the complete amount of data available. It’s infinite, and as the user scrolls, more data is loaded and the scroll bar grows.

When massive data needs to be displayed and analyzed, implementing paging or a no scroll bar type of grid is just not practical. In most big dataset use case scenarios, users aren’t sure where their desired data resides — so they are typically searching/sorting/filtering data first, then scrolling through to sections of the filtered data as they narrow down on the relevant data section.

Highly performant grids implement true virtual scrolling capabilities, so scrolling through any section of the grid is smooth and fast.

Experiments were run on the following popular data grids:

Tests were run multiple times and results were averaged.

Time to scroll through various sections of the grid —

All grids were generally fast when scrolling through the first few entries.

Ext JS outshined ag-grid, Kendo UI, SyncFusion, and Grapecity in all scrolling scenarios and was orders of magnitude faster than the competition. Most competitors were not able to handle fast scrolling — the retrieval either took too long (in minutes) or the test never completed (> 5 minutes).

Ext JS outperformed ag-grid, Kendo UI, SyncFusion, Grapecity in all scrolling scenarios and was more than 300x faster on most operations — completing scrolling actions under a second while competitors took minutes in most scenarios.
Ext JS and DevExtreme results were almost similar through all scrolling operations.

All grids were generally fast when scrolling through the first few entries.
Ext JS grid scrolling speed was at par with DevExtreme but outperformed all other competitors. Ext JS completed scrolling under a second, while others took tens of seconds or even minutes in certain scenarios.

Time to load and render the initial set of static data.
Results: All Grids were equally fast — rendering data under half a second.

Time to dynamically filter on a field. Here we filter data (on characters “Ja” and “Drew”) from a grid column that contains First Names.
Results: All Grids were equally fast — rendering data under ~1 second.

Market leading grids offer a variety of features that modern web apps require but carefully choosing a data grid that can efficiently handle massive amounts of data is key to building robust applications. From our performance evaluation, we can conclude that:

The results show it all — the search for the best performing data grid is over.

See The Results in Action

Interested in looking through the results in further detail? Our team can walk you through every step of the experiment via an interactive live demo so you can see the performance tests and results for yourself.

Get in Touch For a Live Demo

Want to get your hand on the best performing data grid? Get Started with the fully-featured 30-day free Ext JS trial. Robust framework with over 140 components and tools!