Sencha Architect is now even better! Release 2.1 is finally here and the team is excited to share what we’ve been working on for the past three months. The goal for the first minor release was to improve performance and stability while continuing to add functionality that helps developers do even more. Even though this was a minor release, we’ve fixed over one hundred bugs and added a whole set of new features. Here’s a run down of the most prominent features.

Architect now supports Ext JS 4.1, so you can create projects targeting Ext JS 4.1 and get all the performance benefits and other improvements over 4.0.7.

One of the most requested features was the ability to easily migrate from Ext JS 4.0 to Ext 4.1 projects. The Architect and Ext JS teams worked closely to make this capability as simple as possible.

Upgrading is as easy as right-clicking Library in the project inspector and choosing Upgrade. More details are in the Resources guide under Library resource. 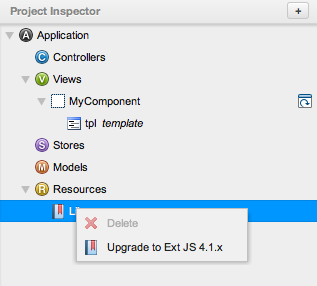 Architect now supports Sencha Touch 2.0.1.1, so you can create projects targeting the latest production version of the Touch framework.

Another goal for this release was to make it even easier for teams to collaborate, and to improve interaction with source control systems. In Architect 2.1, we’ve made the following changes to achieve this goal:

CSS Rendered in the Project Canvas

We’ve enhanced the user experience for editing and changing advanced configs. Editing these configs now brings up the full code editor giving you plenty of room to work.

Many of the framework configs allow more than one type e.g. string, object, or array. Architect now supports these multi-typed configs, and it’s easy to switch between them. Custom configs inherit this ability.

We’ve added a new item to the toolbox called “Class”. This item allows you to extend items in the framework — such as adding abstract classes. Now every top level instance in the Project Inspector (which is a class) receives several configs from the class system (e.g., requires, mixins, singleton, uses, static functions).

Access the message log by clicking the icon on the bottom left of the Architect. This icon also displays the number of messages.

Various settings have moved in the UI in order for them to be more flexible. Ext Direct, Google Maps API, and framework library settings have all moved out of the project settings and into the Project Inspector as Resources.

Sencha Architect examples have moved to Github. This will allow community members to fork and collaborate on these examples. We’ve also added new examples and refreshed the existing ones.

For this release, we made improving the quality of the core product a huge priority. A special thanks to all of our community members who submitted bugs and reported other issues. The Architect team is very confident about the stability and enhancements in 2.1. Plus, new Architect bug reports include more detailed diagnostics that will help the team resolve issues faster.

Performance is a first class feature, and the team has been hard at work executing on this priority. This performance work in the product should positively effect everyone but it’ll show most notably when working with large projects.

Many of our customers are using Sencha Architect as their complete app builder and have whole project teams working with it. It’s been amazing to watch these projects grow in size and complexity! Some contain hundreds of views, and even more models and stores. In Architect 2.1, we’ve made some major improvements in performance. Thanks to our customers who worked with the Architect team via the forums and/or beta program. This greatly helped us test and improve the speed and reliability of Architect 2.1.

For those that don’t know, Architect is built with Ext JS and is a desktop packaged web app. The packager for Architect is built by our Web Platform Team and runs a purpose-built version of WebKit that gives us the ability to use WebKit features in addition to features that are needed to build desktop applications. Because it runs on WebKit, we’re able to use the amazing tools that come with WebKit, such as the profiler. After profiling, what we noticed is that these large projects spent a lot of their time instantiating configs. This probably doesn’t come as a surprise to anyone, but it gave us a vector of attack to make the config system leaner and faster.

We used two customer projects as testbeds for our measurements, Liftshop and Management and here are some of the results quantified. 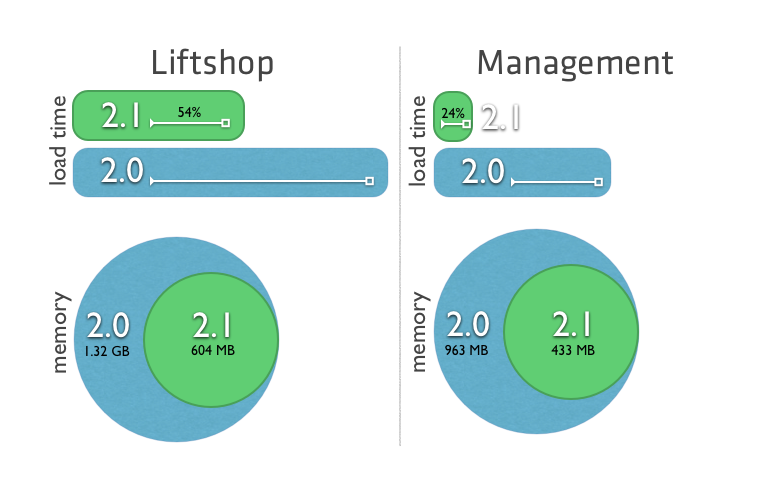 Performance is never done, and we’ll keep working to make improvements to the product, and make UX refinements in the releases to come.

Sencha Architect 2.1 is a big release with a ton of bug fixes, new features, and more. If you’re looking for the full details, the release notes have all the details for you to find what’s in 2.1. Also, like we mentioned earlier, check out the new and updated examples.

As always, you can find the dev team and the rest of the Sencha and Architect community in the community forums. We’re excited to see what you’ll build with Architect 2.1!